I just bought a new rear wheel with an Alfine S7001-11 internal-gear hub. Before installing it, I realized that it apparently has heavy internal friction. When the wheel is set in motion, it comes to a halt again after only a few seconds.

Since I have mostly used bikes with derailleur systems in recent years, I'm not sure if this level of friction is "normal" with internal-gear hubs, or if I received a damaged hub.

For an illustration of the issue, find a video with a comparison of the new wheel with the Alfine hub and my old one with a derailleur system via https://photos.app.goo.gl/5m6GG9HRmzLCeUyS9

Is the hub malfunctioning?

Summary: You should not expect this hub to spin like a well adjusted gearless hub. Make sure that the hub is lubricated and adjusted correctly (assuming it's not broken) and whatever drag is left is normal.

Sheldon Brown on the Alfine 11

The question then becomes - How much resistance is too much?

The key to this is to adjust the hub correctly.

According to the Shimano manual - page 78 (there are pictures)

The manual also details how to add oil or change the oil in this hub.

I own an nexus 7 hub and can say that it will not spin as freely depending on the gear it's in, where the 1:1 gear (gear 4 on the nexus 7) will have the highest mechanical efficiency. Although in general, all gears will cause a slight amount of spin in the crank. As a property of thicker lubricants, the low inertia of a wheel (compared to with a rider) will cause it not spin as freely as long.

Think of it like a fidget spinner; a clean or very light oil on a fidget spinner and it will rotate for a long time. Put a thick automotive grease in and it almost instantly stops spinning. This doesn't mean the bearing in the spinner has gone bad. A free spinning bearing isn't a good indicator of efficiency, only a bearing under load.

I'm not too certain how exactly reliable Rohloff can be on showing efficiencies for competing IGH companies, but below is a chart that they have released relating their own speedhub to the earlier alfine series and derailleur setups. 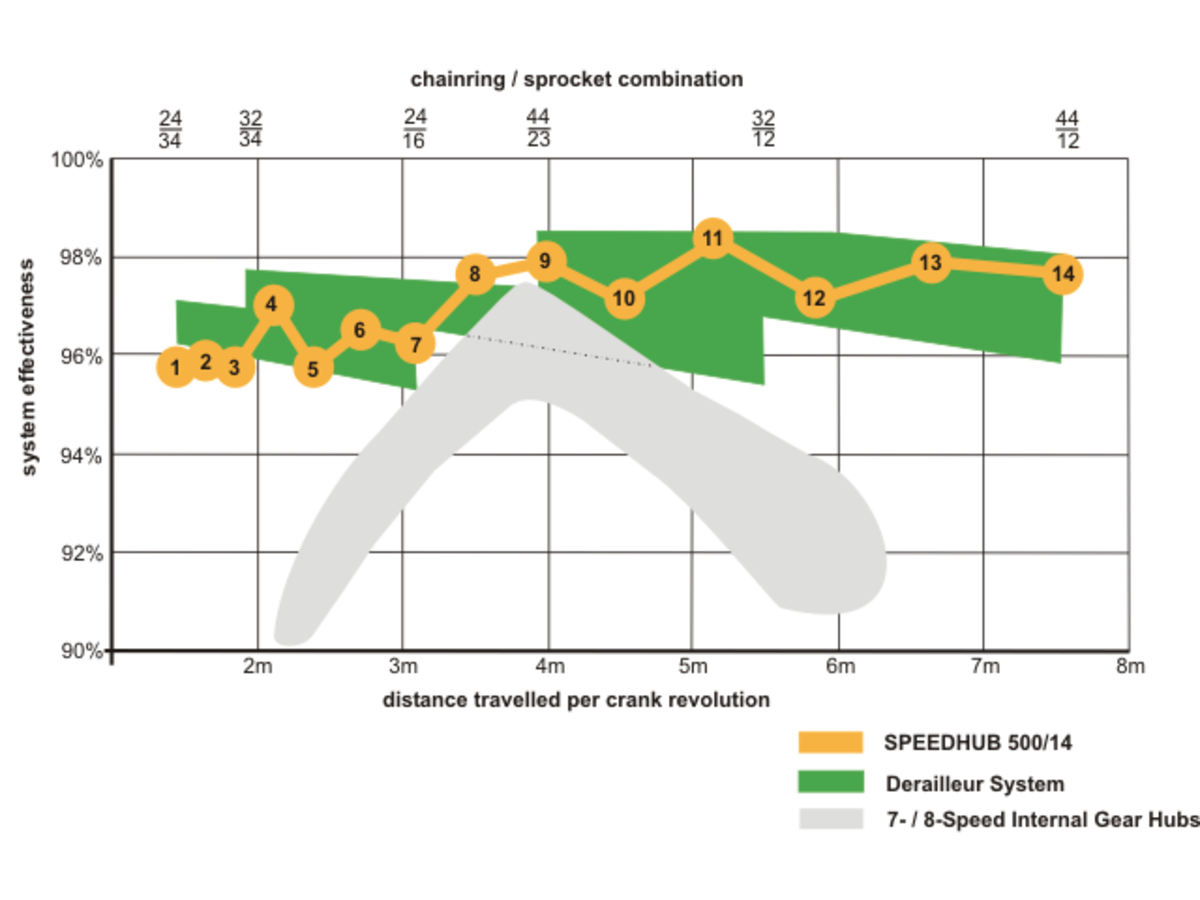 Not the answer you're looking for? Browse other questions tagged shimano gears internally-geared-hub alfine or ask your own question.

5
Alfine 11-speed - what is needed to install it? What are common problems when installing?
6
What do I need to research to switch to an internally geared hub?
0
I need a Crank Reccomendation. Single Speed, BB30
11
How to prevent Alfine 8 from "skipping"/"slipping under load?
2
Will my rear wheel with an internally-geared hub shift forward when pedalling steep uphill?
3
Lubricating an alfine 11 IGH hub
8
What are the differences between the Alfine 8 and the Nexus 8?
2
Commuter bike for better performance: less weight, or internal gear-hub?
3
Back wheel jumping out of rear dropout with child transporter
3
Shimano Nexus 8 internal hub skip/clacking noise when under torque