Is a “run-bike” equivalent to a bmx bike with no drivetrain?

My son is about to turn two and he really likes the Skuut Balance Bike, but is this functionally any different than a small Bmx bike with no drivetrain? 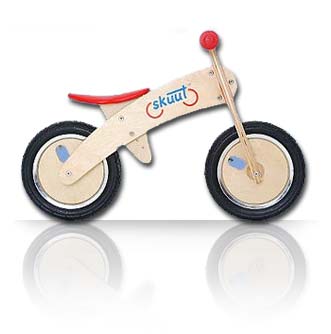 Specifically, is a run-bike designed to be easier to balance (e.g. by changing the distribution of weight relative to a bmx bike)? by the way, I was thinking of bmx-style of equivalent size, not a true 20" bmx bike–

Since my original post, I have found that this type of bike is called a 'run-bike' and that they are made by multiple companies. However, I have never seen one in a regular bike shop.

Knowing the generic name, it was easy to find the wikipedia site and answer my own question 'no'. But I am still open to the possibility that there are differences.

My son received a Kinderbike for his birthday. I decided on the kinderbike based on this NYtimes article and some Amazon reviews that suggested that the Kinderbike is of better quality than the Skuut. 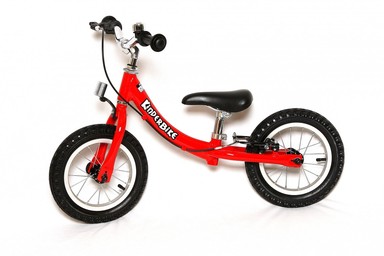 Indeed the Kinderbike uses 'real' (if cheap but sufficient) bike parts, including a real brake and headset. It even comes with a bell! I don't want to talk up the quality too much - while certainly better than what you might find at a box-store like Walmart (those bikes are often non-serviceable), but nothing like what you might find on an entry level adult bike. Out of the box, the rims were out of true, the headset was on too tight, and the tires smell like plastic fumes. But this is all fixable since the components are basically like a regular bike. The Skuut, on the other hand, apparently has plastic washers and cheap tires that make the bike overall not as durable. Although I prefer the aesthetics of a wooden bike, common sense chose durability.

Are you thinking to get a small BMX and take the drive train off instead of getting a run bike, so you can put the drive train back on when he's ready? Otherwise I don't quite understand the purpose of the question, sorry.

If that is you're idea I'd suggest that's probably not a good idea. It's going to be difficult to find a BMX small enough for a two year old to easily put their feet down and run, and you're paying for extra components (chain, cranks, pedals, brakes) that you don't need. Unlike an adult bike those components aren't likely to be easily removeable, and it's likely to be a lot heavier and more clumsy for your son to use.

A run bike is going to be focused on what is most important at that age - teaching balance - and everyone I know who has had one has enthused about how easily their child was able to transition to a bike with a drive train after having a run bike. Also, because they tend to be quite well made and not abused, there's a healthy market in them on ebay, so you should be able to sell it relatively easily when it's time for the first proper bike.

You can use a kids bike without the drive train. Specialized Hotrock 12" without a drive train works. The Specialized Hotwalk was small for my son. By removing the pedals etc and lowering the seat to the min it worked well.

The answer is 'yes', given that a 'run bike' is defined by wikipedia as any bike without a drivetrain or training wheels.

But it is possible that some models have specific advantages, e.g. related to geometry, weight distribution, or handling

Not the answer you're looking for? Browse other questions tagged children learning or ask your own question.

59
What is the best method to teach a young child to ride?

26
How can I teach my capable 20-something friend to ride a bike?
8
What to look for when buying bicycles for children
11
When is a child ready to switch from scooting to pedaling?
3
DIY solution for carrying kids on a long-john: ideas?
1
Can a saddle clamp be upside down on a children's bike?
7
Teaching a child to push off
1
Rear rack or similar storage options for child's bike (16" wheels)
5
How to properly attach a “tag-along” bicycle
2
What makes a great kids city bike? (and where can I find or how can I build one?)
3
My child seems to have difficulties riding bike - would different tires help?