I bought this bike off Ebay in Germany. The previous owner said his father owned it.

What year and exact model is it?

There is "Paris" written on the frame. I looked through the German catalogues at bikeboompeugeot.com but couldn’t really find it. The closest was a P 8/S from 1988 but the color is different.

I'm not sure which of the above is from the original build. 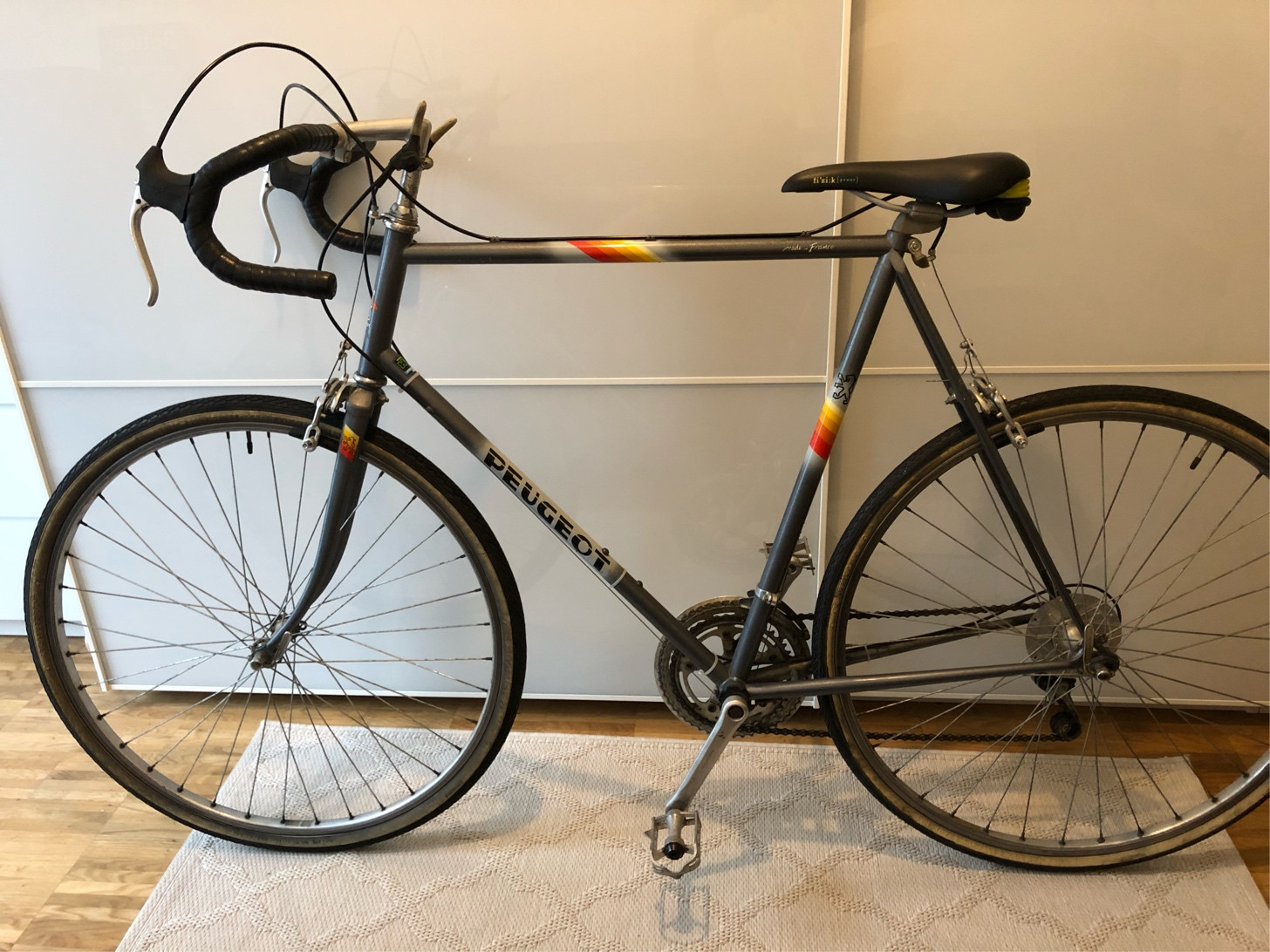 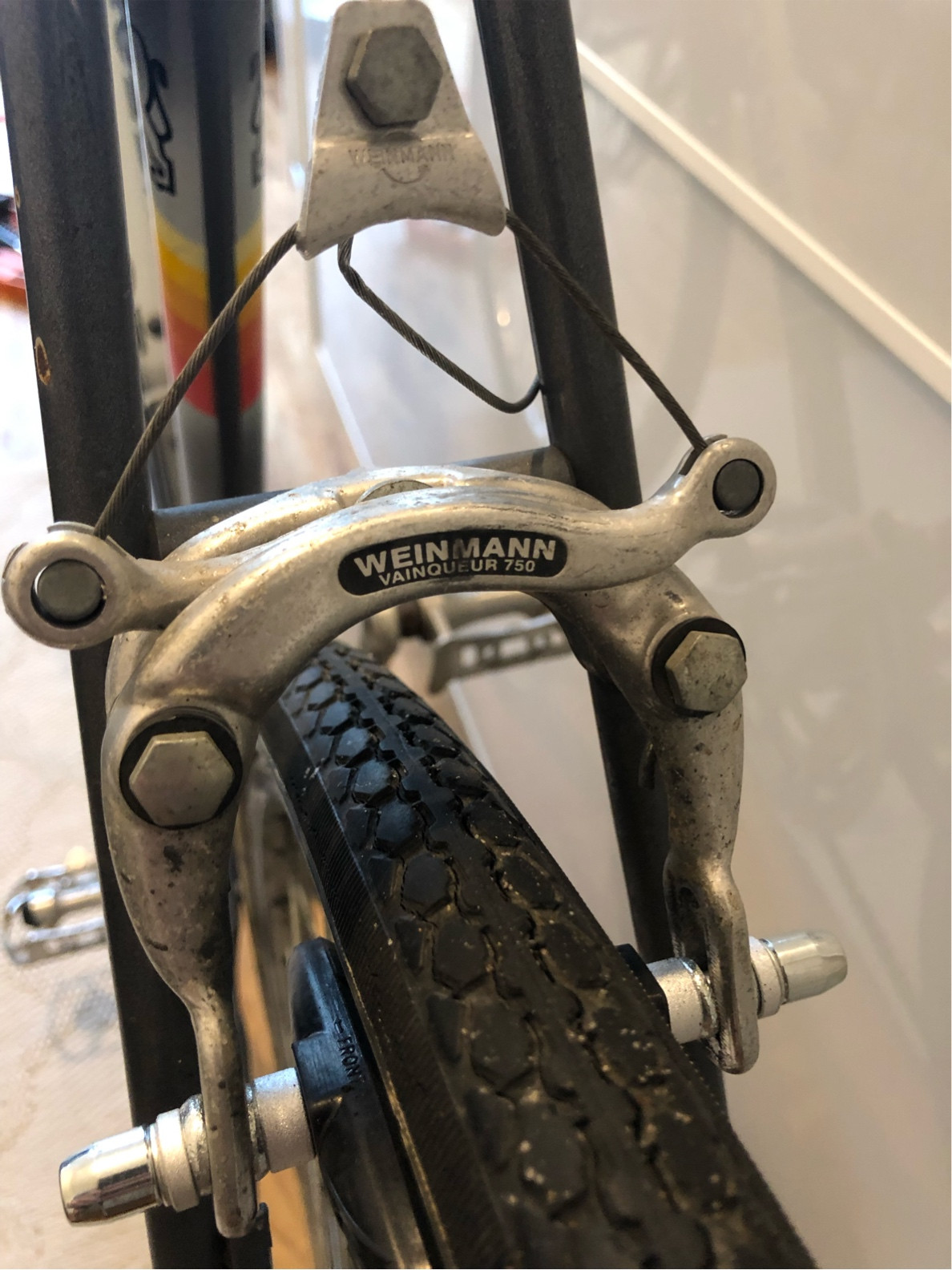 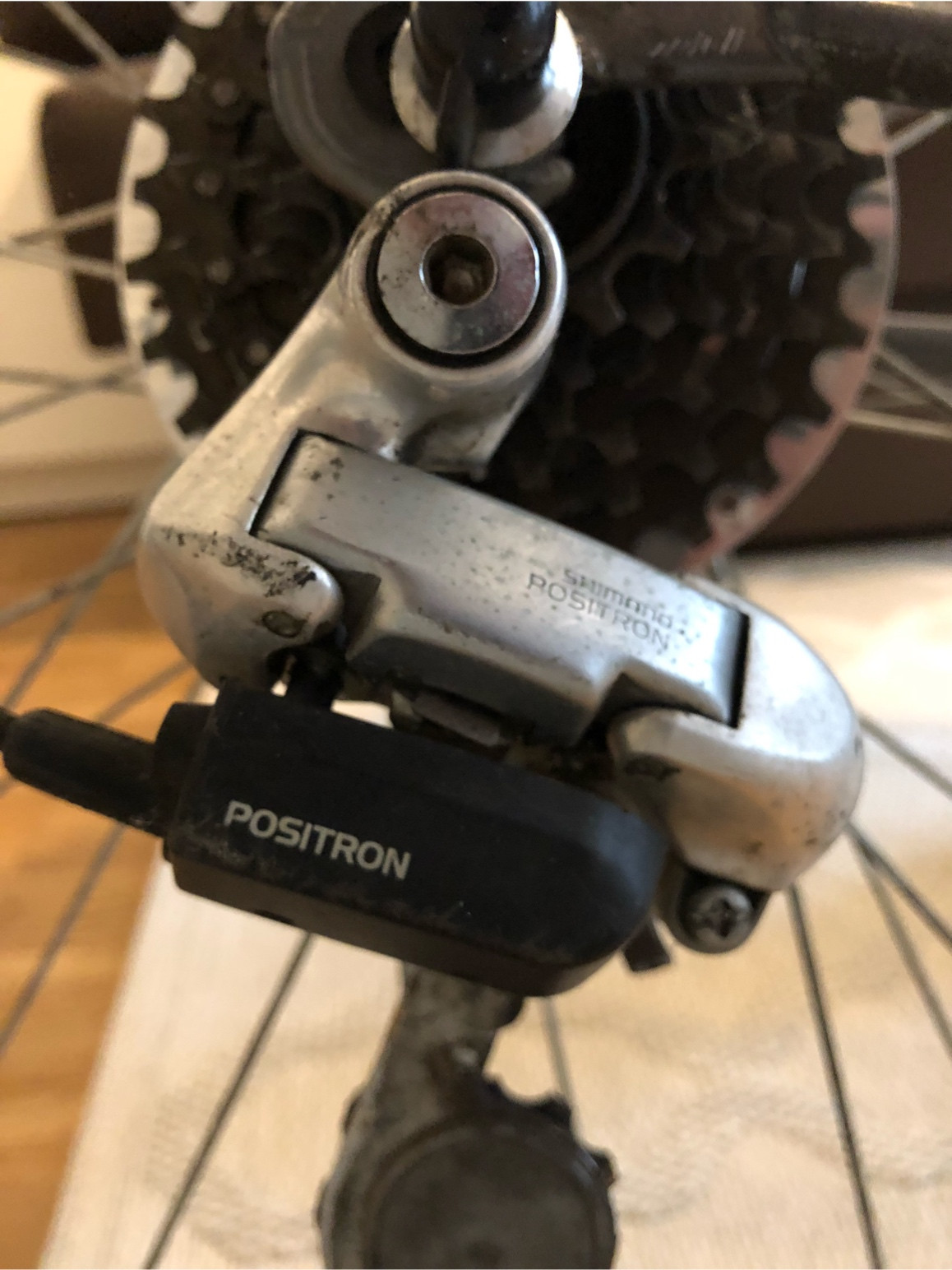 This looks awfully close to your bike, the 1987 Iseran, USA model: 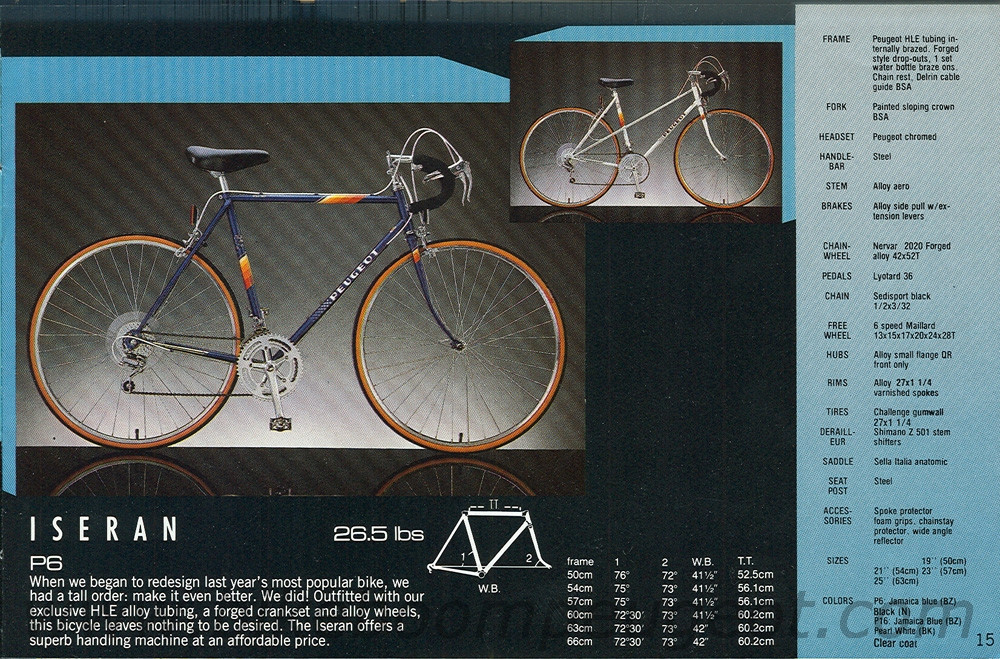 I'm pretty sure the yellow-orange-red "rainbow" markings put your bike in the 1986-1987 time frame. The Iseran does have Shimano shifters spec'd, but the derailleur isn't specified in that link.

The center-pull brakes don't seem to be original, though. I don't think I've seen a Peugeot spec'd with those, but who knows.

Also, your paint scheme seems a bit more complex, with faded-in white around the "rainbows" and the Peugeot on the downtube. I'll just note that my 1987 Tourmalet's paint job doesn't match the paint job on the 1987 Tourmalet in the brochure, but it does match the mixte-framed Iseran shown and the 1987 Ventoux's paint, so perhaps Peugeot wasn't too strict in following their own brochure when painting frames and assembling bicycles from parts.

Note that there are links for catalogs from other countries, and I've noted in the past that the same-named bikes in the catalogs for different countries often do differ somewhat in paint scheme and components.

You will probably struggle to get a perfect ID on this bike unless you get a response from someone who used to sell them. I have tried to identify Peugeots in the past and there's only so far you can go. The naming scheme is difficult to work with as the model number the bike was sold as is never printed on the bike.

The tubing isn't the very best available but it makes a nice frame to ride and you have a good one with the classic Peugeot brazing technique where the tube interfaces look as though they are just touching together with no visible welding. It's a method only Peugeot used on a large production scale and that's the interesting part of the bike. Usually these have all french components at this level but yours has a functional mixture of produce from other countries, all of which are fine but will not make the heart of the collector race with desire. I suspect it may have had updates through the course of its life, but that is my own opinion.

I hope you enjoy riding it.

This is really an extension of the answer from @AndrewHenle - I just extended his detective work.

I found a paint scheme that matched the OP's bike on the 1988 'Bordeaux': 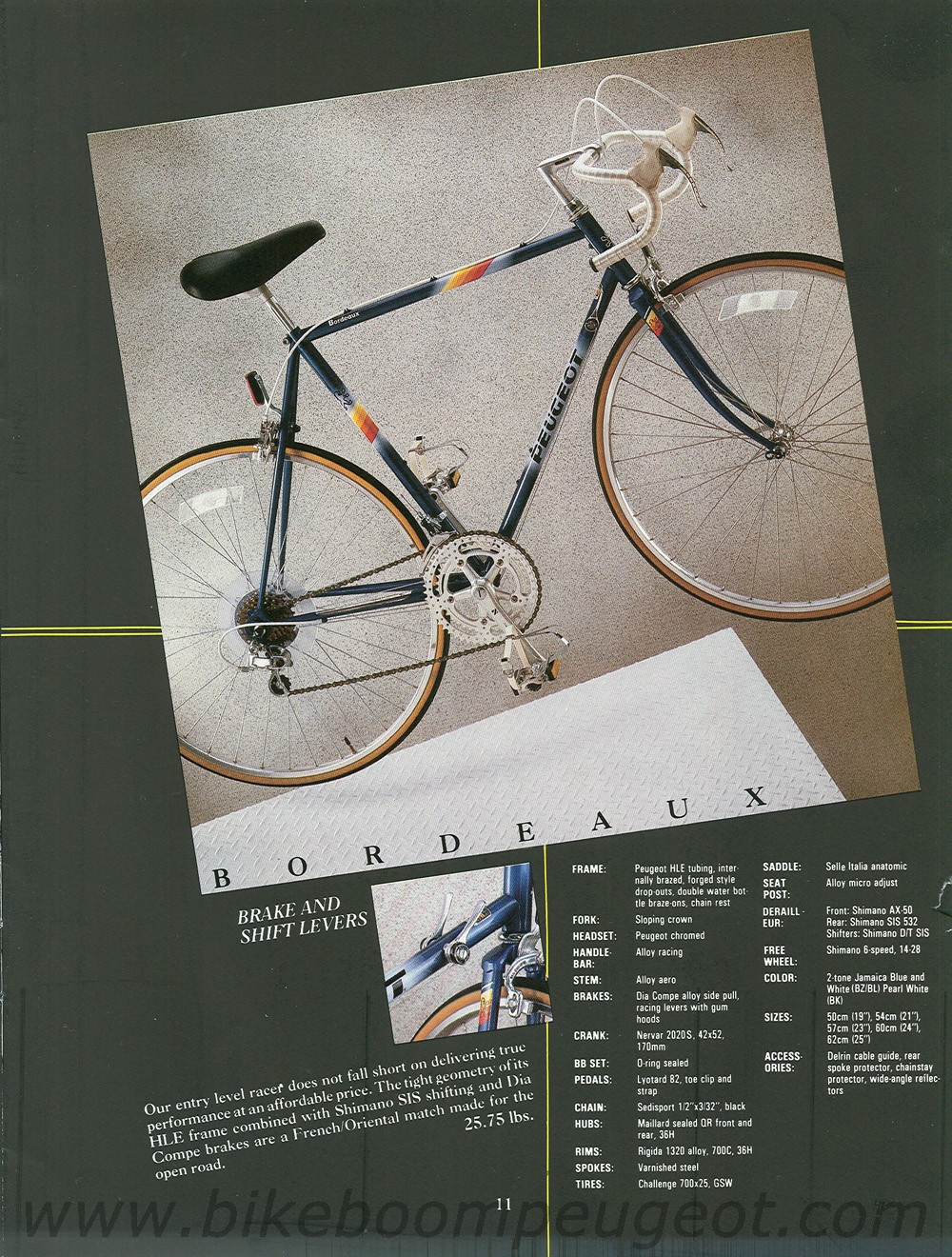 However, this features down tube shifters, so is not the bike in question.

Also from 1988 is the 'Monaco'. The picture below shows it in white/blue, but the small print (and ladies model) suggest there is also a navy/white option: 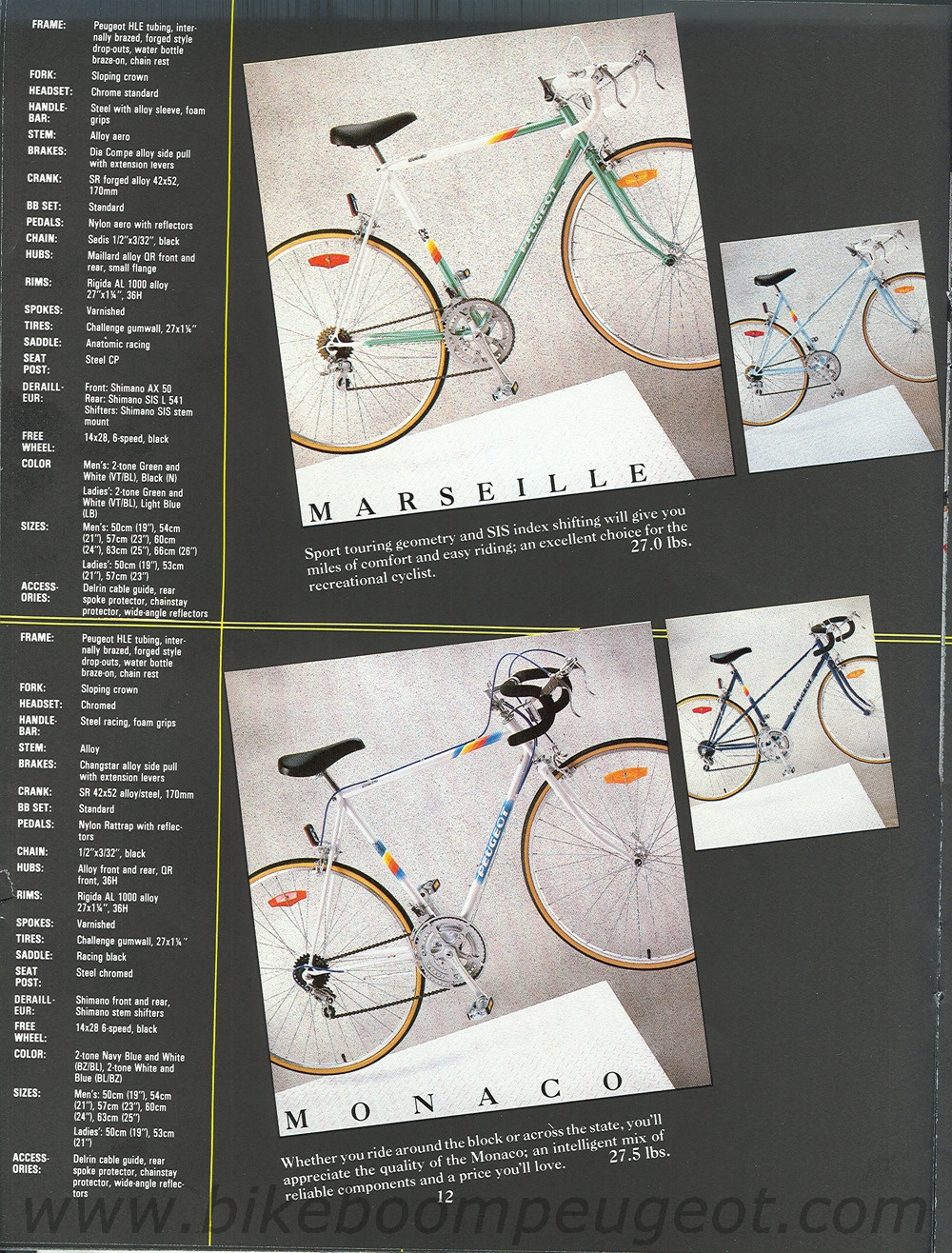 And with a bit of googling, I was able to find one in the flesh: 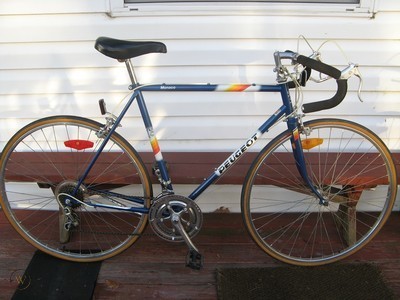 Following on to Andy P - agreeing that it's a Monaco but the German version.
It looks like a 1988 P 8/X Monaco. Peugeot's touring bike offered in Germany.

The parts (Center pull Weinmann 750s and Shimano Positron derailleur. Fenders and rack removed.) and frame construction match.
The bike in the original post is a different color. Since I can't read the text I can't tell what other colors were offered.

Not the answer you're looking for? Browse other questions tagged identify-this-bike peugeot or ask your own question.